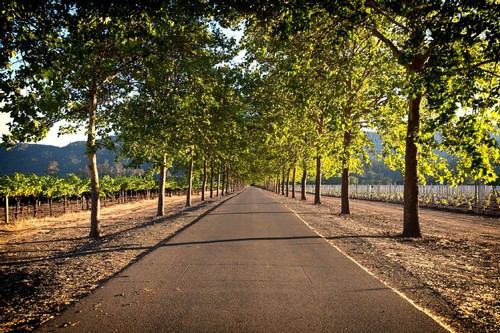 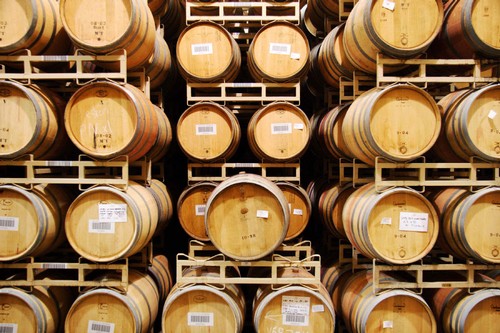 A home estate owned by Ximena Orrego and Guy Insley, Atticus vineyard is a carefully tended site just outside of the town of Yamhill, Oregon. Raptor Ridge has been working with Atticus since 2006, first as a custom crush client for their own Atticus brand, and then infused in our own blends since 2010. Characterized by big red and black cherry fruit with tremendous length, these Pinot Noir clones of 667, 777 and Pommard are planted in Willakenzie soils at an elevation of 350 feet in the Yamhill–Carlton AVA.

Atticus Vineyard fruit has been utilized in our 2012 Trig, 2012 Reserve, and   2010 Willamette Valley offerings. In addition we are proud to offer our first    Atticus Vineyard Designate bottling in 2012 to the Flight Club portfolio. (photo credit: www.atticuswine.com)

Located in the Chehalem Mountains AVA at 700-foot elevation, Black Hole Vineyard is planted to Dijon clone 777 and Pommard. Since 2011, Raptor Ridge has included Black Hole Vineyard fruit in its Trig, Reserve, Willamette Valley and Vineyard designate bottlings. These Witzel soil plantings offer notes of baked plum, pencil lead, forest floor and mushroom. Probably the most asked-about name for a vineyard, Black Hole gets its moniker from the vineyard co-owner  who one day said, "This vineyard is a big black hole into which we keep pouring money.” We’re glad that Tom and Deb Mortimer have invested so wisely in this piece of dirt, and painstakingly brought it to life with such quality fruit for us to source!

In 2012 we had the great pleasure of adding a new sub AVA to the Raptor Ridge mix when David and Jeanne Beck approached us about working with their Dijon 115 clone Pinot noir from Crawford Beck Vineyard in the Eola Amity Hills. These meticulously cared for vines are planted in Jory soils at 460-foot elevation and impart the classic blue fruits found in the Eola-Amity AVA with a lovely hint of forest floor/mushroom all wrapped up in a very silky texture. A cool site, these grapes typically come in later in the harvest. (photo credit: http://www.crawfordbeck.com/wp-content/uploads/2013/01/whopage-vineyard-view-4.jpg)

Heading west from Carlton on the valley floor, Meadowlake Road gradually ascends into the Coast Range, where it tracks the Nestucca River through coniferous rainforest to the Pacific Ocean. The foothills here contain one of the larger vineyard designates in Yamhill-Carlton, the 210-acre Gran Moraine Vineyard. Planted in 2005 by Pacific Partners, in conjunction with CALPERS (California Public Employees Retirement System), Gran Moraine climbs from 180 to 420 feet, and is planted to both Chardonnay and Pinot Noir.  Well-drained, ancient Willakenzie and Hazelair soils are aided by state-of-the-art vineyard management, and produce classically-styled red-fruited wines, with hints of bittersweet chocolate and baking spice. Since 2009 Raptor Ridge has sourced clones 114, 667 and Pommard from mid-slope blocks, as well as those at the top of the hill.

Susan Meredith and Frank Mitchell first approached Scott and Annie about their McMinnville AVA vineyard in 1999 concerning the impending vintage 2000. They liked what Scott was doing with Murto Vineyard andShea Vineyard fruit, and as new land owners, wanted to see what Scott could do with their Pommard clone planted at 400-foot elevation on shallow Willakenzie soils with veins of fractured basalt.

The resulting wine quickly became recognizable in the Raptor Ridge lineup from this vintage forward for its signature inky blue hue, matched on the palate with intense aromas and flavors of blue-black fruit, and concentrated spice notes of briar and sage. The Meredith Mitchell Vineyard designate is a perennial favorite of Flight Club devotees.

Raptor Ridge has been working with Olenik Vineyard since 2009. Located on the warmer south-facing bench of the Chehalem Mountain AVA, these Pommard Clone Pinot Noir blocks are fast becoming a favored vineyard designate in the Raptor Ridge program. Fruit from this site also provides a great blending tool for our winemaking team. Olenik fruit is noted for its brooding, dark, richness and structure. Raptor Ridge uses Olenik Vineyard fruit in its Reserve, Willamette Valley and Vineyard designate bottlings.

Raptor Ridge has been sourcing fruit from Dick and Dierdre Shea since the 1996 vintage, making us one of the longest running producers of Shea Pinot Noir in the Willamette Valley. The vineyard is located north of highway 240, between the town of Yamhill and the Chehalem river valley. In the early days,  we sourced own-rooted Pommard and Wadenswil from the original 1989 plantings; these days, after working with several parcels, we've settled on Block 11, providing us 115 and 777 clones of Pinot Noir. Shea is a perennially warm site, giving surprising richness and texture in cool years, and muscle and opulence in warmer ones. Shea's fruit profile is highly typical of the larger Yamhill-Carlton AVA - brambly red and black berry fruit, with a loamy complexity and notes of licorice.

Keep up to date on the latest wine releases, events, and promotions.